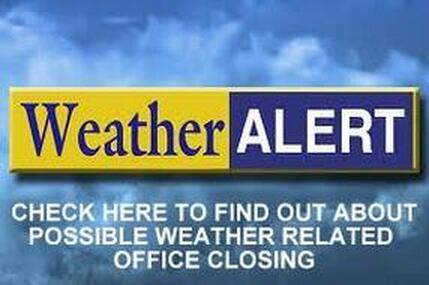 Check this page if you want to find out whether the office has been closed as a result of bad weather conditions. If there is no date filled in below and no notification of closure, then the office is open as usual.
​BMA IS OPEN


SHOVELING SNOW SAFELY
some tips from the American Academy of Orthopedic Surgeons.

* Warm up your muscles by doing some light calisthenics (walking in place, squats, jumping jacks) for 10 minutes before you head outdoors.

* Pace yourself by taking frequent breaks. And drink plenty of fluids to avoid dehydration.

* Use a shovel that is comfortable for your height and strength. Do not use a shovel that is too heavy or too long for you. Consider buying a bent-handle shovel, that's designed to prevent too much stooping. Space your hands several inches apart on the tool grip to increase your leverage.

* Push the snow instead of lifting it, as much as you can. When you do have to lift snow, take small amounts of snow at a time, and lift it with your legs, not your back muscles: Squat with your legs apart, knees bent, and back straight. Lift by straightening your legs, without bending at the waist. Then walk to where you want to dump the snow, holding the shovelful of snow close to your body. Holding it with outstretched arms puts too much weight on your spine.

* Do not throw the snow over your shoulder or to the side since this twisting motion can stress your back.

* If you're using a snowblower, never stick your hands or feet in the snow blower. (Okay, that seems obvious, but some folks probably do it.)  If snow becomes too impacted, stop the engine and wait at least five seconds before using a solid object to clear wet snow or debris from the chute. Beware of the recoil of the motor and blades after the machine has been turned off. Also, never add fuel when the engine is running or hot.
NY Times : December 12, 2012 : By Anahad O'Connor

THE CLAIM:
Shoveling Snow Raises the Risk of a Heart Attack

THE FACTS:
Every winter, as blizzards bury towns across the nation, reports inevitably surface of middle-aged snow-shovelers suffering heart attacks. Many health officials routinely warn that shovelingsnow can raise the risk of heart attacks. But the warnings have largely been based on anecdotal reports.

In a recent study published in the journal Clinical Research in Cardiology, scientists tried to ascertain whether the link was real or exaggerated. So they reviewed patient records from two winter seasons at Kingston General Hospital in Ontario. The scientists pinpointed 500 patients who arrived at the hospital with heart problems during the two winters.

Over all, roughly 7 percent of the patients were shoveling snow when symptoms began. About two-thirds of them were men — average age 63 — and they were highly likely to have had a family history of premature cardiovascular disease.

The authors called the 7 percent significant and said the number may be much higher, since many patients may not have mentioned that they were shoveling snow at the time their symptoms began.

In a smaller study published in The New England Journal of Medicine, researchers found that most heart attacks from shoveling snow result from heavy physical exertion causing trauma to coronary arteries, which ruptures plaques that cut off blood flow. One way to lower the risk, particularly in people who smoke or rarely exercise, is to reduce sudden exertion. Experts recommend shoveling early, when snow is lighter, and taking breaks.

THE BOTTOM LINE:
The exertion involved in shoveling can rupture plaque and cause heart attacks, particularly in those with a family history.